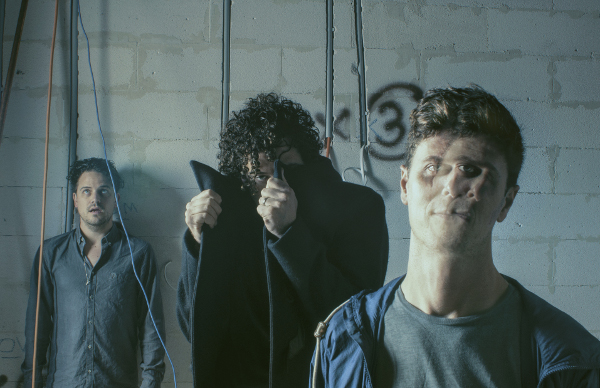 Australian experimental electro-rock band PVT, formerly signed to Warp Records who are now with the Brooklyn label Felte Sounds, have recently released their fourth album, Homosapien. Drummer Laurence Pike spoke with us via Skype about a range of topics at the end of the band’s recent Australian tour.

Congrats on the new album. Did you feel that recording it on home soil in an old, rural Australian mansion gave the album a different energy?
Laurence Pike: First and foremost I think being altogether in the one location for an extended period had the biggest impact. In the past we’ve made albums separately, or in short bursts in inner city studios, so living and working together for three to four weeks in a big old house I think made things more cohesive and of a particular moment.

I don’t think going to the country was necessarily an aesthetic decision, but certainly one of our ambitions for the album was to maintain more discipline and patience with our ideas, and leave space in the music for them to breathe, so having the vastness of Australia outside the back door and only kangaroos and hills as neighbors certainly made it easier to get into a relaxed and focused state of mind.

The international music press and the fans are very supportive of the new album. Has that given the band an even greater confidence?
To be honest, I think we’ve never let the press or others opinions be the thing that gives us confidence. It’s something that has to come from within. We’re very hard on ourselves, and set high expectations of what we do. I think if we’re making music that feels exciting and somewhat challenging to us, and playing well as a band live, that gives us confidence.

The music industry is in the weirdest place it has ever been right now, it’s a fucked up time to be a recording artist, certainly for someone that wants to make a body of work over a long period of time. For us, we can’t afford to buy into anything, and it’s dangerous to start believing your own press, and it’s become more important than ever to put our heads down and go as hard as possible. Sustainability has become the key for anyone who exists somewhere between the latest buzz band and a heritage rock act, which should be said, is most people.

Having said that, we’ve never had more support from radio in particular, and we’ve been really pleased with how people have received the album. There’s definitely nothing wrong with positive energy surrounding what you do and it’s certainly welcome.

What music has the band been listening to post the making of the record? Or maybe you haven’t had time?
I find I tend to listen to music mainly between periods of writing and recording, so a good question. There are a few constants of course, but lately I’ve been listening a lot to the last couple of albums by Talk Talk (Spirit Of Eden and Laughing Stock), the new David Bowie album as well as a recent fascination with “Let’s Dance.” Rich has been quite heavily into a lot of UK electronic and techno stuff; guys like Nathan Fake and Luke Abbott (who just did a fantastic remix for us actually… there’s a free download of it over at Rolling Stone).

We’re always listening to different stuff, a lot of it may not even have a direct relevance to the band’s output, but I think we’re serious music fans at heart, and often listening is just about the pleasure of it. I’m really looking forward to hearing the new album by The Knife actually.

Yeah.
I don’t think so. No one has the money to do that, only a select few. YouTube is definitely a way that a huge amount of people access music, so there’s definitely more impetus for bands to have visual content to accompany audio. It just means greater invention on your part to pull something interesting off for no money, that and the generosity of talented friends, which is a constant for any indie band. Friends have always made all of our videos, for next to no money, and I’m really proud of them, I think we’ve consistently done interesting clips. Have you seen the “Vertigo” clip in 3D?

Yes, I watched it last night… really incredible work and I need to watch it again. I really dig the artwork on the album by Winston Chmielinsk, it reminded me of the Australian war artist Ben Quilty’s work. Are you familiar with Ben’s work?
Yes, I know Ben Quilty’s stuff. He’s got that emotional rawness that I think Winston also has. It’s one of the things I wanted the album cover to have — that and color — and the human body in some form. When I saw that painting it was quite instantaneous, I immediately thought “that’s the cover.”

“To be honest, I think we’ve never let the press or others opinions be the thing that gives us confidence. It’s something that has to come from within.”

How was the Australian tour this March?
It was interesting fun. I think we played fucking terrific shows, and we’ve been using this new light show as well, which has really stepped everything up to a new level. You wouldn’t see many local bands staging that sort of thing in the size of venues we’ve been playing. We don’t do many shows in Australia, which is a regret of mine. We play far more overseas than at home. I’d like to change that the next couple of years. I’m still feeling a little dusty from the Perth/Adelaide leg on the weekend to be honest.

What’s one of your favorite songs off the new album to play live?
All the new stuff has gotten to a good place live, I feel like we’re comfortable with it enough for it to start to bend and stretch a little more, and hopefully enjoy it more on a level that goes beyond just executing the parts. “Evolution” and “Cold Romance” are both a lot of fun for me live, and “Love and Defeat” is probably one of the more subtly intricate things we’ve ever attempted, but when you get it right it can really go somewhere. I think there are a few directions we could head in next just coming out of those three songs.

How do you deal with the post-tour comedown?
Often I deal with it by drinking a lot of red wine, and whiskey if it’s winter. I temper that with daily exercise too, try and keep my brain from going kaput. It’s not easy. Touring can do real bad things to your brain; take you really high and to some real low places. Music is a tough mistress. The other thing is, trying to work, try and output new ideas, positive energy, never let myself fall down the hole.

Since you guys have been working and touring with some big giants in the business (Brian Eno, Sigur Ros, The Chemical Brothers) when you first meet, is it hard not to fall into a trap of interviewing them? I know I would!

(Laughs) No, I don’t think like a journalist, and I think when you meet people that you admire artistically, more often than not you quickly realize that they are just musicians much like yourself, just much further down the path, or more commercially successful. It’s often easy just to talk about music, and things you like, or where to get good Japanese food.

I read that when you guys were first signed to Warp you sent them a hotdog in the mail to say thanks? What did you send Create/Control when you signed with them?
Yes, that’s true, we sent a hot dog in a regular envelope from Sydney to London and it made it through customs no problem. I think they were confused. We had dumplings with Create/Control, just ate them, no posting. In New York, we ate at Mission Chinese with our US label guy Jeff from Felte Sounds. We like good food.

What have the audiences been like in North America?
I think American audiences are generally pretty open to things. It’s a huge country and far more provincial and regional than viewing their media from afar would have you realize. We’ve only just started doing stuff there in the last couple of years. It’s a huge proposition for an Australian act, it takes a lot of money and consistent visits to make an impact, but we’ve enjoyed our times there so far.