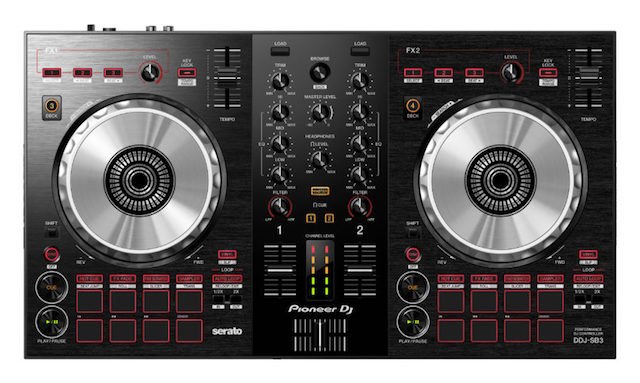 Beginner and pro DJs alike have reason rejoice. Pioneer DJ have upgraded their DDJ-SB2 Serato DJ controller in the form of the improved two-channel DDJ-SB3. The unit sports a more inuitive interface, including the introduction of the dedicated play and cue buttons and the independent Auto Loop button.

In collaboration with legendary turntablist/arist DJ Jazzy Jeff, Pioneer DJ have introduced a new feature called Pad Scratch, which enables DJs to reproduce scratches based on Jeff’s own recordings by simply pressing the Performance Pads. Plus, smooth mixing is a breeze thanks to another new feature, FX Fade.

The DDJ-SB3 is available now at an SRP of £229 including VAT (roughly US $315). The DDJ-SB3 unlocks Serato DJ Lite – which is available for free download – when connected to a computer running the software.

Check the specs and promo video below.

KEY FEATURES OF THE DDJ-SB3

1. Designed for use with Serato DJ Lite for intuitive DJ performances
The layout design of the DDJ-SB3 is inherited from the top models in the DDJ-S series. The jog wheels, Performance Pads, play and cue buttons, independent Auto Loop buttons and all the knobs and fader positions in the mixer section are arranged in a way that enables intuitive, professional DJ performances.

2. World’s first Pad Scratch for easy, professional scratch performances
By simply pressing the Performance Pads on the DDJ-SB3, you can use the Pad Scratch feature to imitate eight different scratch techniques recorded by DJ Jazzy Jeff. Any track that you’re playing or have cued up will be scratched, and the scratch speed automatically matches the track’s BPM. So even if you have no experience, you can create professional scratch performances without breaking rhythm. Use the feature in isolation or combine it with your own scratching on the other deck for limitless creative possibilities.

3. FX Fade for smooth mixing
Using the new FX Fade feature, you can reduce the volume and apply FX to a track at the same time. Whether you’re an experienced DJ or a beginner, this enables you to smoothly transition to your incoming track, even if you’re playing with different genres of music. There are eight FX patterns to choose from, with two of each of the following types: high pass filter, low pass filter, loop playback and back spin.

4. Visual design enables intuitive performances
The DDJ-SB3 feels natural to use thanks to the clear visual division of the player and mixer sections, which feature a hairline and glossy finish respectively. The aluminium jog wheels create a quality look and feel.