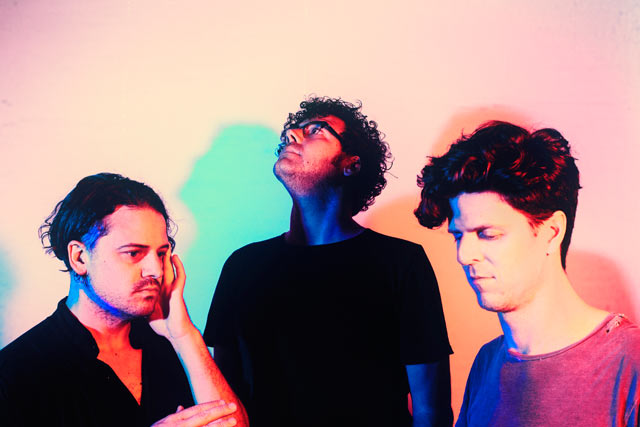 PVT, the (electro) thunder from Down Under, are back with a stellar new album, New Spirit. We recently did a one-hour phoner with PVT drummer Laurence Pike and chewed on the musical marrow of many things. As well as drumming with PVT, Laurence has released music with jazz artist Mick Nock, art-rock band Jack Ladder and The Dreamlanders and also worked on an ambient electronic project called Szun Waves with UK electro producer Luke Abbott.

Congrats on the new album. I feel like this is potentially one of the most refined and complete records you guys have made so far. Can you tell us about this ‘new spirit’ you guys have found in the three years the band has been away recording?
Laurence Pike: Thanks. I definitely feel like it’s one of the strongest albums we have made since O Soundtrack My Heart (2008). We’ve had lots of good critical feedback from the listeners and the press, which suggests it’s one of the better things we’ve done. But actually we are not tying to impress anyone else with it but ourselves really.

Was there a conscious decision from the band to make a more electro album this time?
Yeah. I think we’ve always tended to move in a tangent from whatever the last thing we’ve done was. We wanted to focus more on our strengths with this one. We all seemed relatively aligned with what we thought the focus of the album should be and we kept the elements simple.

Are you able to give us a brief tech rundown on what gear you guys used to record the album? I particularly liked Rick’s (PVT’s vocalist) vocal variations.
A lot of that comes from just one piece of equipment, an early voice transformer that’s been around for years. It’s a cool sound. We made a lot of our own vocal samples and then translated that through a MIDI keyboard. I wanted the drums to sound like a person playing in a room. I like the fact that the album feels quite human and that there are mistakes in there. We wanted to avoid editing out any of the humanity and sterilizing things too much.

Who are some other bands or DJs you guys were listening to in the lead up to this record? I’m hearing traces of, The Knife, Talk Talk, Talking Heads and David Sylvian in there?
I feel like a lot of those people you mentioned have been omnipresent throughout our career. In particular we had all been listening to a lot more electronic music and that influenced the general pallet of the album. I know Richard in particular has become interested in a lot of the sort of post-internet Vaporwave producers, which sort of exists on its own terms and in its own bubble. We wanted the record to feel quite hyper real, almost sort of minimal/maximum … a limited selection of sounds doing a kind of maximum amount of things, if you know what I mean?

I know Richard is really into this label called Constellation Tatsu. He has really got into finding artists and labels on Bandcamp. There is a guy from Melbourne called Nico Niquo, who Richard also got me into. When we were recording early demos for this record, I was really into Olof Dreijer (who goes under the moniker of Oni Ayhun) who is one of the members of the Swedish band The Knife. He has a bunch of 12-inch techno albums that Dave (Miller; laptop, production in PVT) put me onto.

These days there is such a proliferation of electronic music. The technology is so accessible and it is very easy to create electronic music that doesn’t necessarily have a lot of depth to it. Whereas, when you look back at the history with guys like Autechre, it’s all about process. They build whole systems to generate a new album. Even Aphex Twin would modify his equipment and create entirely new and unknown music from that.

The lead single “Morning Mist, Rock Island Bend” is an epic 9-minute song. What were the reasons to make the lead single in a longer format? It feels like a nice protest to what the usual industry standards are for a hit?
My ambition was to have every track on the album that long if it wanted to be, or if it felt like it, you know what I mean? We are not making music for radio necessarily. For the future, I think that is the way forward in which we want to go. We just keep making things we think are interesting and try to better ourselves with each one we do … something we feel like will have some longevity. I think this record has some really great, exciting sounds and a consistent pallet to it, which is really satisfying to look back on.

Could you explain some of the themes about the Australian identity or the environmental/political message that pops up on the record?
I think that was very much at the forefront of our thinking when we were making the album. I am hesitant to say, “it’s a political record” directly. I don’t think the lyrics are immediately political, I think it is more suggestive. If anything, I think it is more about the Australian environment and climate and that does touch on politics. I think the physical and also spiritual landscape of Australia was something we wanted to capture. We wanted it to be an Australian record when we were writing it. It was around the height of (former Australian Prime Minister) Tony Abbott’s madness and then he got axed shortly after we finished making the album. The word ‘spirit’ is a word that gets bandied around in Australia in a jingoistic way and that word came up quite a bit when we thinking of an album title and ideas for songs.

“We started PVT because we wanted to explore music of a certain nature and that has been the motivating force. The band is a vehicle to explore musical ideas and that has sustained us for five records. That’s not a small achievement; a lot of bands would be lucky to get past an EP before they’re spat out.”

What can the audience expect from your upcoming European tour?
With the recent Australian tour we wanted to play the new material and challenge ourselves and translate the sonic environment of the record into a live experience. I can’t wait to go back to France; we’ve always done really good shows there. I’m really looking forward to eating some good cheese and drinking some wine. It’s a compact tour and it’s nice not to do the long haul tours like we used to.

Do you guys have any North American dates planned?
Nothing planned yet. Getting visas can be really expensive for the band, which is a bit disappointing. We would love to be able to go there and share our music with people, but you never know?

I managed to see PVT play live in Shanghai, China, last year. Did you all enjoy that experience playing in the Middle Kingdom?
I was thinking about that the other day. It was a wild experience. For all of us it was our first time to go there, and we’ve always wanted to go. We had no expectations and we thought the festival we played at was terrific. To spend a few extra days there, meet some good people and eat some delicious food was great. These accumulative touring experiences are the ones I really value, to be able to go to a place like China and get a palpable sense of how people live and what the country is like, is terrific. Not only on a musical level but also just as a human being in the world, you know?

Can you tell us about the album cover art?
We chose Jonathan Zawada. He is an Australian designer living in LA. He’s incredible, we have had a connection with him since 2008 and we just felt like he would be the guy for the job. We gave him a brief of the album and he just nailed it. He recently made us some awesome T-shirts based on that leaf image. He is just a huge talent, huge talent (Larry says with a satirical Donald Trump-esqe voice).

All the members of PVT have side projects, not all bands are able to maintain those and still commit to their original band, but you guys have. Is that because you all have a good working, now 10-year, musical relationship?
Yeah, that keeps a good balance amongst us. It’s important. For a lot of bands they’re people who are in a band and outside of that they may not produce any other work. We started PVT because we wanted to explore music of a certain nature and that has been the motivating force. The band is a vehicle to explore musical ideas and that has sustained us for five records. That’s not a small achievement; a lot of bands would be lucky to get past an EP before they’re spat out.

The music videos for the new album are a visual feast and quite an achievement considering budgets for MVs must be quite tight. How did you guys manage to pull off such quality work?
The director Mclean Stephenson and I went up to the Blue Mountains for a couple of weird days to shoot “Morning Mist, Rock Island Bend.” It took a bit longer than anticipated as often these things do. I’m really happy with how it turned out. A colleague/drone enthusiast of Dave’s helped us out with that one as well. And Mclean has just done a new video for the “Kangaroo” single. We also worked with James Pillion on “Another Life,” who is a young, Australian director and who has been living in Berlin and did a couple of clips for my musician friend Alex Cameron. They looked like a million bucks! We approached him to make a video for us and he went and shot it in a remote location in Romania.

What’s next for the band beyond the Europe tour in April?
It depends on what life throws up. I’ve got a bunch of other musical projects, soundtracks and session work lined up for this year. We would like to do some more PVT shows in Australia if we can? I will be doing a separate Australian tour with D.D Dumbo in June. I think the focus for us is just to keep engaging in more exciting, creative projects and also to keep the longevity of the band going.

PVT’s New Spirit is out now on Felte.