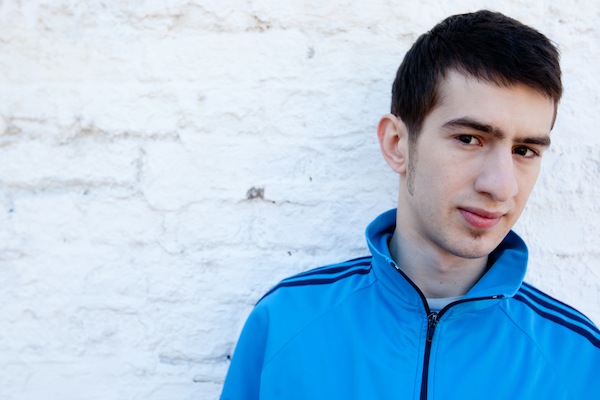 British progressive house DJ/producer Mat Zo has music in his blood. Literally. His mother is an accomplished violinist and at an early age began soaking up music like a sponge. Fast forward to the present and Zo is regarded as one of the most up-and-coming jocks on the global scene, thanks to a slew of smoking hot remixes and productions. After his tracks found themselves in heavy rotation in the sets of renowned DJs from all over the world, he began a successful relationship with Above & Beyond’s Anjunabeats. In this exclsuive interview conducted in Miami, Zo opens up about his interesting past, his ongoing work with Arty and hints at new projects we can expect from him. Spoiler alert: he’s working on an artist album!

I understand your mother is a professional violinist and raised you with more than just a sense of an appreciation for music. What are some of your fondest memories of that upbringing and her influence that you carry with you today?
Mat Zo:  I remember the first time she taught me how to play piano. I remember getting completely excited about making music, and I think it all stemmed from there really.

How old were you?
I was two.

Some kids fight it a bit. Well, maybe not at that age but when they get older and when they want to go outside and just play with their friends.
I kind of did fight it when I was a little older but deep down I couldn’t escape from being a musical person.

You spent a significant amount of your childhood in Cleveland, OH, and, as they say, “Cleveland Rocks.” Your father presented you with a guitar when you were eight. Who were your influences back then and what were you playing?
I was big into grunge and Alice In Chains, Soundgarden and Nirvana. At the same time I’d just discovered Daft Punk, The Chemical Brothers and Fatboy Slim so my musical tastes back then were even more varied than they are now.

“My mom’s very supportive. She listens to all my music and follows me on Twitter and all that.”

So you were interested in grunge and rock and then you found electronic dance music. How did that transition happen? When and how did you find out about all that?
There’s this Canadian TV channel called MuchMusic. Back in 1998 when I was a little kid in my basement listening to that station they had this club show every Saturday I think it was. They would bring on DJs and that was my introduction to dance music.

How do your parents feel about your successful music endeavors and paths you’ve taken so far?
First they were a bit unsure about it before I made something out of it. Now that I’m touring the world and doing something with music I think they’re proud of me, understandably I guess.

Is your father doing something in music as well; I know he bought you your guitar.
He loves music but he’s a painter by profession.

You’re from an artistic family all around. Do they understand the music you listen to? Do you play it for them? Do they understand what it’s all about?
My mom understands it a lot more than my dad. My mom’s very supportive. She listens to all my music and follows me on Twitter and all that.

It’s almost obvious because of the availability of electronic dance music in London, but do you recall some of the first moments that you heard and fell in love with EDM while living there?
I definitely liked drum ‘n’ bass and garage. I was introduced to that when I moved over there. It’s massive in London.

Who were you emulating and what means did you use to explore your craft?
At first I wasn’t even using production software. I was making MIDI’s which are just computer generated but a little hard to explain. Basically I got into it just making melodies without really producing. Back then I was just trying to be Daft Punk which isn’t too far off from what I’m doing now.

Were you already writing some of your own material?
I think I started making my own music when I was about eight. I’ve been pretty much doing it my whole life.

Do you recall your first gig and your track selection?
My first professional gig was in Utrecht in Holland for Trance Energy in 2008. It was a very small pre-party. The company was called Luminosity. Since then they’ve grown a lot. My first ever gig was at my friend’s birthday party and I was in the booth with about five other friends and they were playing with the pitch faders. I was playing stuff like Steve Angello and a lot of house music.

When and how did your relationship with Above & Beyond happen?
They asked me to do a remix for them in 2008. They liked it and then afterwards they asked me if I had any original stuff and if I wouldn’t mind signing with them. I immediately took a shine to the label.

How did they find out about you?
It was a remix I did of Tiesto.

What was song that Above & Beyond asked you to remix?
It was a song called “Fallen Tides” by Mark Pledger and Matt Hardwick.

What can you tell about your relationship with Arty?
We work really well together. Every time we make a track together it turns out really well. I guess our two styles go really well.

How did you two meet?
It was through Anjunabeats. I was playing a lot of his stuff and he said at the time I was one of his biggest inspirations and vice versa and it just happened.

What’s the thought process involved, the production involved, and how to you come to the conclusion that it’s complete when you produce an amazing track like “Rebound” or “Mozart?”
If I knew where the inspiration came from I’d be making a lot more music. Sometimes you just have one of those days when you wake up and an idea comes.

And then there is your single effort “Yoyo Ma” which is a lovely track. What was your inspiration for this one?
I played around with the synthesizer trying to make a dirty bassline but ended up with a cello instead.

Are you currently collaborating with anyone that you’d care to share?
I’m doing another collab with Arty. Other than that pretty much just working on my album and trying to get that finished first.

Is there someone you’re interested in working with?
There are loads of people. Madeon from France. He sounds really promising. One of my all-time favorite bands, Radiohead. If I would ever get to work with them I think my life would be complete.

What is a current hot track for you? What might we hear from you at the Group Therapy show?
Every gig now I’ve been playing this track by Dada Life called “Kick Out The Epic Mother Fucker,” and I’ve mashed that up with Avicii’s “Levels” and it’s been going off really well but more or less on the commercial side I’ve been loving tracks by Alex Kenji and Phunk Investigation and Da Fresh. I really like the more techy, groovy sound of them.

Once Miami Week is over and done what do you have planned?
My girlfriend’s coming over from LA for a week and we’re going to spend some time together. I’ll have a gig in India and Helsinki, and I’ll still be working on all of my album tracks. So yeah, it’s going to be a busy summer.